The world is worried, all the star signs are gone! As a retired star sign signaler Amplitude the fish feels responsible to restore the order in the galaxy. He decides to take on the mission and bring all the lost star fishes home to their designated star.

Little did he know, that all the star fishes got scared away by the poisonous jellyfishes, can Amplitude bring the young stars back?

for the “International Educations Game Jam 2022”.

Bring the colored fishes back to their corresponding colored star, watch out for obstacles, and unite the colors in a beautiful star sign!

The graphics are this game's best aspect, while the controls are its worst.

Here are some notes:

Constantly feeling like you're a fish on ice instead of space makes for a not-so-pleasant experience, resulting in using dash (the only consistent movement option) 90% of the time over anything else;

Making the background a moving picture instead of the usual static one is definitely a nice touch. But when you're constantly using dash, the ~80% of the stars following you result in confusion of whether you've moved far enough/moved at all (maybe if the "star shifting" was a bit less dramatic it would be better?);

On top of that an addition of some sound effects and a pause button would also make the game better.

Overall it's a neat little game, it has its flaws but it's definitely still enjoyable and playable (although not for me, as at some point my FPS started to drop by the minute and at the ~10 minute mark of my playtime I was left with an unplayable slideshow, but maybe that's just me).

Graphics Looks very good but the movement and the sound could have some improvement. 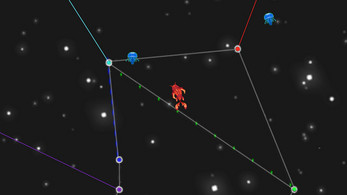 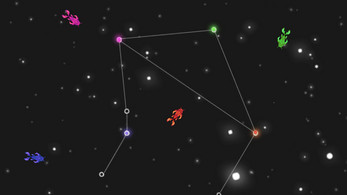